You have item(s) in your cart 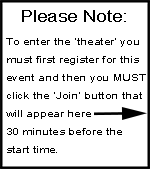 Filmmaker Jason DaSilva has been living with a severe form of multiple sclerosis for over 10 years. In his wheelchair, Jason begins to realize just how many places he is unable to experience with his son. To solve that, he works on a nonprofit AXS Map to help him determine the places he could go. When his son moves 1700 miles away to Austin, Texas he is unable to cope with this loss. He attempts to relocate to Austin which reveals to him the extent of the broken Medicaid system, and ultimately discovers that the Medicaid system would require him to live in a nursing home. When We Walk documents a devoted father and filmmaker with an indestructible drive to keep the cameras rolling no matter what and to show his son what it means to never give up.
Paired with the Short Film, Edwin

Join Live Web Event Already Registered? Sign In
If you change your mind, you will still be able to rejoin the live event before it ends.